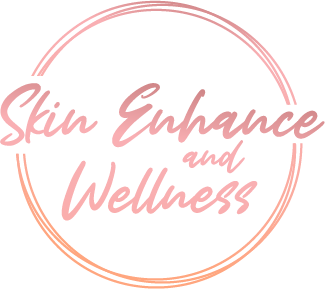 Skin concerns you can expect during pregnancy 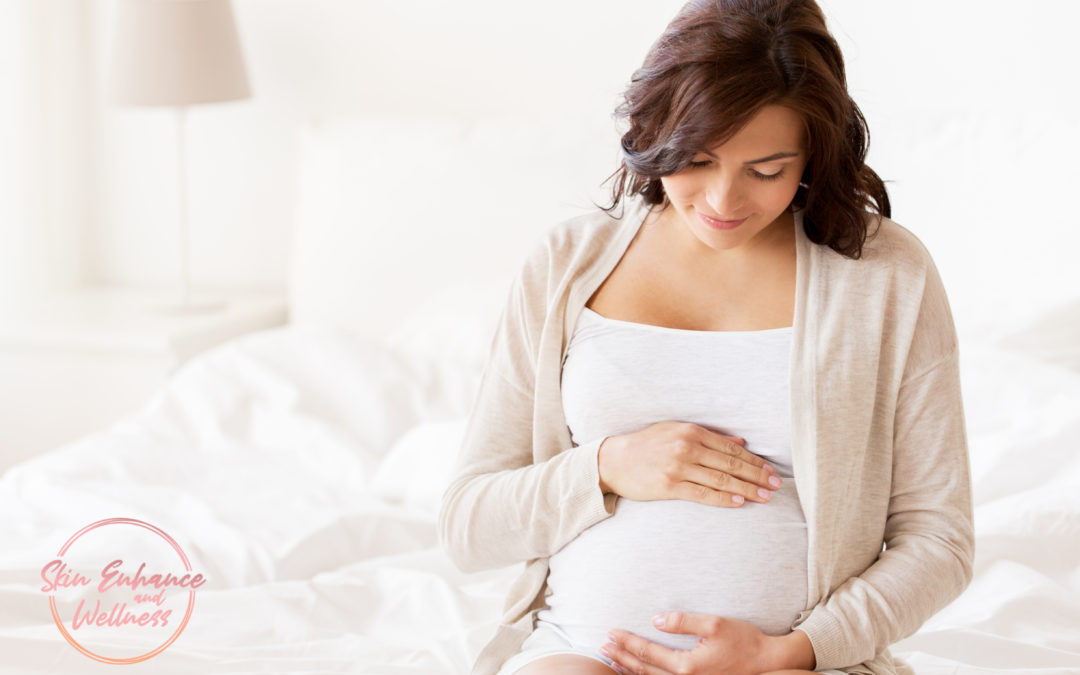 During pregnancy, you may experience a ‘pregnancy glow’. There is increased blood flow to the surface of your skin as well as more blood circulating which creates this ‘flushed’ appearance. This usually settles after delivery.

You may notice Spider Naevi and Telangiectasia. This is thought to be stimulated by increased levels of the hormone, oestrogen, and normally erupts in the second trimester. Oestrogen causes dilatation of blood vessels which can become unstable and congested giving rise to these abnormalities. Common areas for this to appear are your face, neck, upper chest, arms or hands. You are more likely to be affected if you are fair-skinned and they may disappear in late pregnancy or after delivery of the baby.

Spots, Blemishes and Acne during Pregnancy

Androgens target the sebaceous units within the skin. Each sebaceous unit comprises of a hair follicle which has a sebum-producing gland attached to it. When stimulated by androgens the sebum production is increased. Excess sebum production without a corresponding increase in secretion capacity leads to a collection of a sebum plug beneath the skin surface. This sets off an inflammation cascade encouraging bacterial overgrowth and pustule formation. For details about the different presentations of acne see my blog on  Adult acne 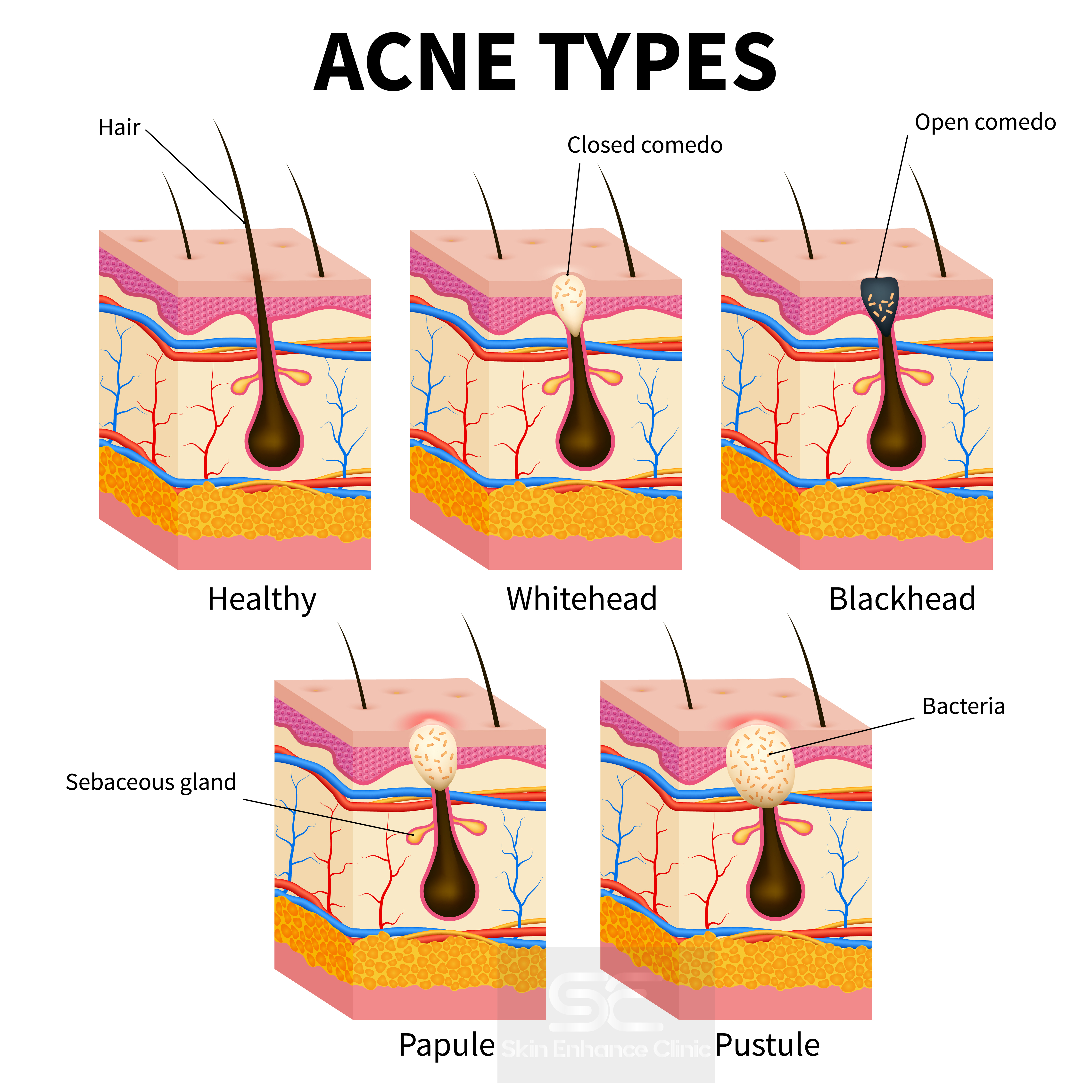 What treatments are available for acne and what do I need to avoid during pregnancy?

We just don’t have enough safety data on products during pregnancy, but experts agree that topical products are not going to reach significant levels in the mother’s bloodstream to reach the unborn baby. I will discuss common ingredients used to control acne in general. Mainstream acne treatment can be found here Acne Management

The treatments aim to do the following: 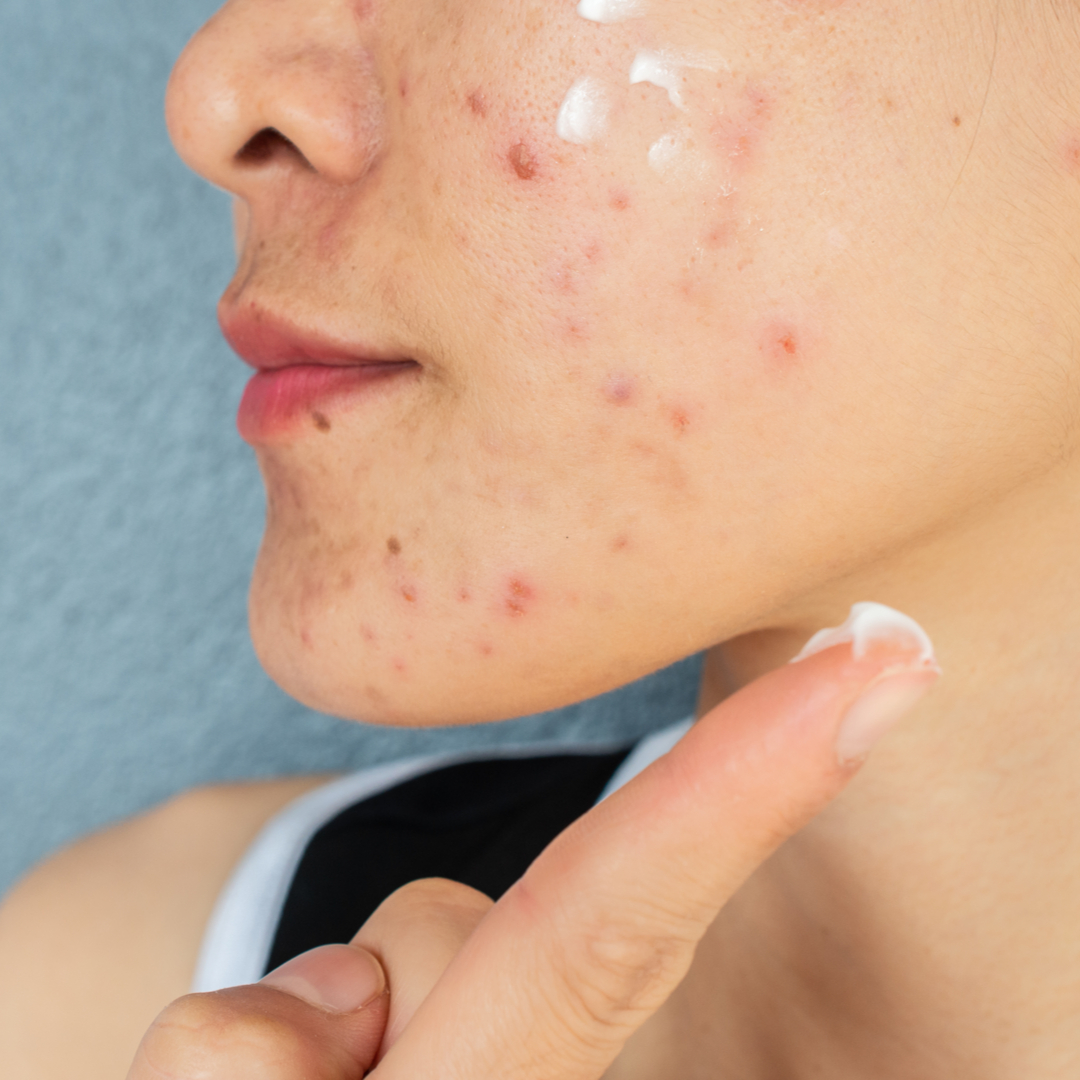 These are common ingredients used in acne management. Salicylic acid is a beta-hydroxy acid (BHA) that reduces oil and sebum levels, reduces inflammation and encourages exfoliation. Glycolic acid is an exfoliant, so it removes dead skin and unclogs pores. As an alpha hydroxy acid (AHA), glycolic acid has also been shown to increase collagen levels with long term use.

Studies show between 25-27% gets absorbed through intact skin depending on the strength, pH level and quantity of acid applied. There are no studies on the use of topical salicylic acid or glycolic acid in pregnancy. Studies conclude that very low percentages are unlikely to cause any harm when used topically. However, concentrations in medical-grade skincare may be too potent and most brands advise avoidance of these ingredients in pregnancy.

Azelaic acid works like an AHA unclogging pores and increasing cell turnover but it also kills acne bacteria and reduces inflammation. It is available at a lower percentage over the counter and a higher percentage on prescription. According to the British National Formulary, its use is not contraindicated in pregnancy.

Benzoyl peroxide is an antiseptic used alone or in combination to reduce bacteria in acne management. According to research, only 5% of benzoyl peroxide applied on the skin gets absorbed through your skin. There are no studies published on the use of benzoyl peroxide in pregnancy. The general consensus is that its use is unlikely to pose any risk to the baby.

The commonest antibiotics used in topical preparations are clindamycin and erythromycin. They are recommended to be used in combination with benzoyl peroxide to reduce the development of antibiotic resistance. Studies show that when applied on the skin, the antibiotics are not detectable in the blood. On balance they can be used to control trouble-some acne in pregnancy.

This includes retinol and retinoic acid (tretinoin) used for acne management. They have multiple roles as they reduce inflammation, reduce sebum production, encourage exfoliation and unclog pores. They potentiate the effect of other treatments, for example, allowing antibiotics to penetrate the skin. Although the amount of this ingredient absorbed through the skin is very low, there has been some evidence of major malformations in babies born to mothers using topical retinoids, so it is contraindicated in pregnancy.

Melasma is a condition where there is increased or darker pigmentation in the face. If this occurs during pregnancy, it is called chloasma or pregnancy mask. Classically it presents as symmetrical pigmentation on your forehead, cheeks and lower face. Although it is not exclusive to dark-skinned individuals, the changes are more noticeable in this skin type. It may begin in the second or third trimester and may persist for months to years afterwards being resistant to fading. Hence pigmentation is a common skin concern both during pregnancy and afterwards. 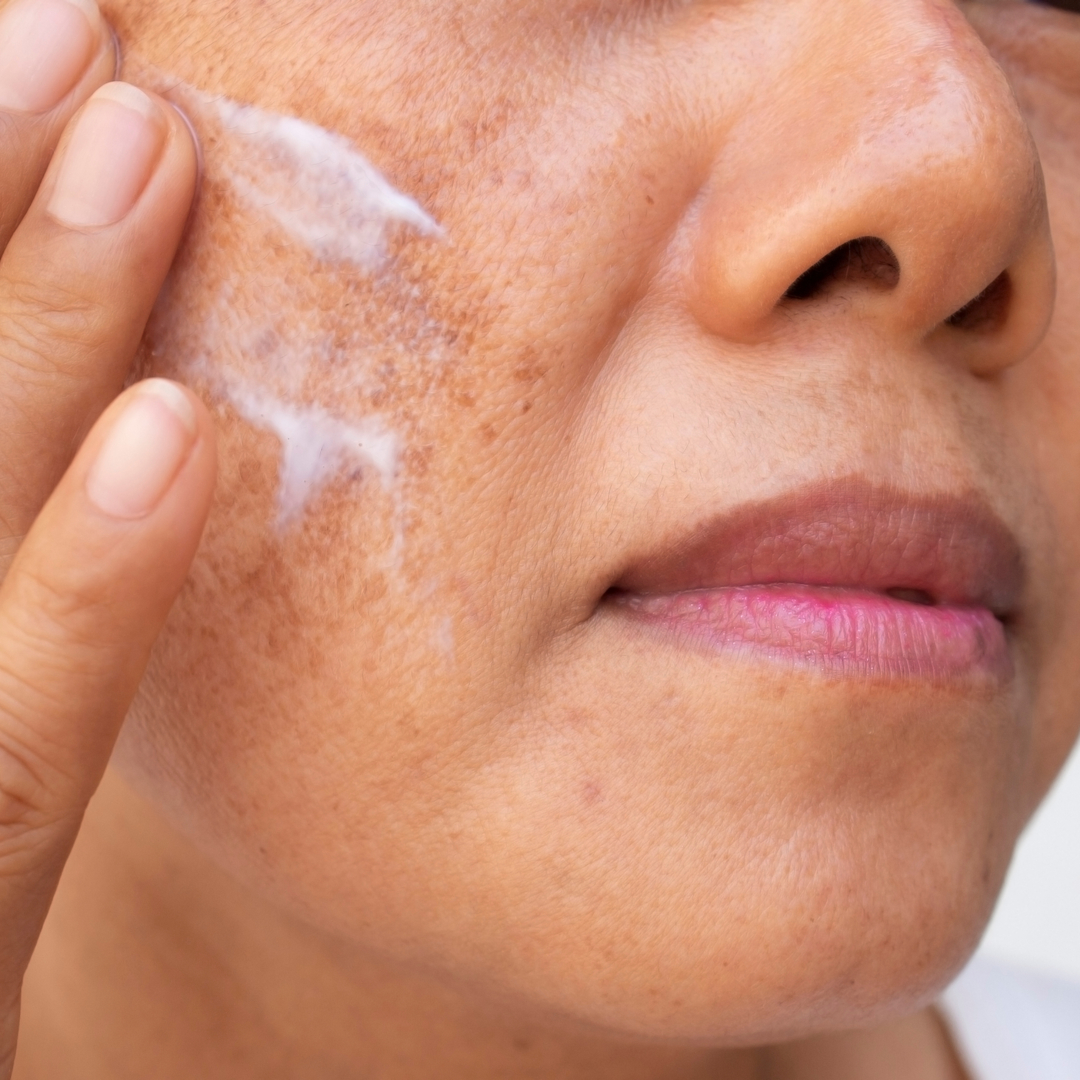 What treatments for pigmentation do I need to avoid in pregnancy?

This is a gold-standard ingredient used to stop a crucial step in melanin production hence has a powerful effect on bleaching the skin. It, however, cannot reverse your natural skin colour so only works to eliminate acquired pigment. It is found in medical skincare products at 2% and prescription-only medication skincare at 4%.  Due to the potential risk of causing ochronosis, a permanent blue-black discolouration, hydroquinone must always be used under the guidance of a doctor.

In studies, 35-45% of hydroquinone has been shown to be absorbed from the skin. Due to the substantial level absorbed into the skin, hydroquinone is not safe to be used in pregnancy.

When used as a skin-lightening agent, arbutin is converted into hydroquinone in the body therefore it should not be used in pregnancy.

They speed up cellular turnover helping to shed pigmented skin cells while inhibiting melanin production. Their use is pregnancy should be avoided as discussed above.

No treatment is effective unless new pigmentation from UV damage is prevented with sunscreens. Broad-spectrum sunscreens limit UV exposure into your skin. The absorption of some chemical filters such as oxybenzone, octocrylene and octisalate are below the limit of detection. Physical protectors are preferred due to their action relying on reflection of UV radiation.

Stretch marks are red-purplish areas that result from stretching of the skin mainly from the second trimester of pregnancy.  Common areas affected are the abdomen, breasts, thighs, lower back, buttocks and upper arms. They occur as a result of rupture of dermal elastic fibres hence are irreversible. After delivery, they fade by themselves to thin, lighter pigmented scars.

What treatments are available and are they safe in pregnancy?

No treatment is recommended during pregnancy and topical ingredients cannot reverse the damage. Post-delivery, a course of mesotherapy with targeted serums or medical microneedling can help to increase collagen levels and improve stretch marks.

Once the baby is delivered, breastfeeding mothers are given the same advice regarding products as during the pregnancy. This is because it is unethical to involve a lactating mother in clinical studies so we always air on the side of caution.

Skin concerns like acne and pigmentation can cause significant shame and embarrassment as well as anxiety and stress. These can potentially worsen the original skin condition, leading to a loss of confidence and even social isolation.  Pregnancy is a special time in a woman’s life and knowing that there is help available for these concerns can be a great comfort.

If you are interested in receiving a bespoke skincare treatment regime during pregnancy, please get in touch for a consultation.

Skin consultations during the lockdown

For further information or to book a virtual appointment during the lockdown, contact me via phone, email or the website.